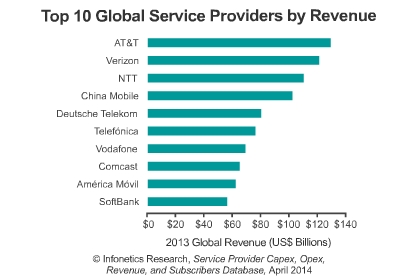 According to Infonetics Research, the world’s top 3 service providers by revenue in 2013 are AT&T, Verizon, and NTT Group, while China Mobile tops the rest of 10 service providers wth 29% for highest capital intensity (capex-to-revenue ratio).

The report also highlighted China Mobile, with 767 million subscribers as the top service provider in terms of mobile subscribers in 4Q13, while Vodafone Group and China Unicom took the 2nd and 3rd placing. For the VoIP segment, NTT Group, Comcast, and Orange led with highest subscriber numbers while for FTTH, China Telecom and NTT took the top spots.Other market leaders included Comcast which ranked highest for the cable broadband segment.