When you compare the digital divide to other countries around the world, it looks like nothing more than a minor crack in the UK. That said, it is still there and new research suggests it is getting smaller.

Before you give the mish-mash-of-no-one-wants-jobs Department for Digital, Culture, Media and Sport too much credit, you have to bear in mind this is research which has been funded and influenced by the department itself. That said, government initiatives do seem to have spurred on the lethargic Openreach/BT into action in the countryside taking the number of households which are able to access superfast broadband across the UK to 95.39%.

“Our rollout of superfast broadband across the UK has been the most challenging infrastructure project in a generation but is one of our greatest successes,” said Minister for Digital, Margot James. “We are reaching thousands more homes and businesses every week, that can now reap the clear and tangible benefits that superfast broadband provides. We are helping to ensure the downfall of the digital divide.”

In terms of closing the digital divide, it is worth reminding ourselves every now and then what this actually means. It is more than simply cat videos streaming faster than a laser pointer on the carpet, but accessibility to education and employment opportunities. With businesses increasingly reliant on the internet for everyday processes such as cloud-based services and infrastructure, connectivity decides whether a company opens up an office in one place or another, or the competitiveness of a regional. Functional companies create jobs, which dominos success throughout the local economy.

The initiative was first launched 2010/11 in response to concerns commercial deployment of superfast broadband would fail to reach areas which were not deemed commercially attractive. Backed by £530 million of subsidies (and an additional £250 in 2015), telcos were enticed to rollout out relevant infrastructure, though early years were plagued with claims BT was rebuilding its monopoly with public funds as it won the majority of early contracts. While the criticism of BT’s dominance continues to be an issue for some, it is worth noting £500 million in subsidies has been returned to the public purse due to uptake being higher than expected.

In terms of the impact on local firms, the report estimates postcodes benefitting from subsidised coverage saw employment rise by 0.8% and turnover grow by 1.2% in response to improved infrastructure. This has resulted in an additional 49,000 jobs for local economies, plus an additional £9 billion in annual revenues. When looking at productivity gains, better connectivity essentially means each employee makes an additional £1,390 per year on average for the firm. 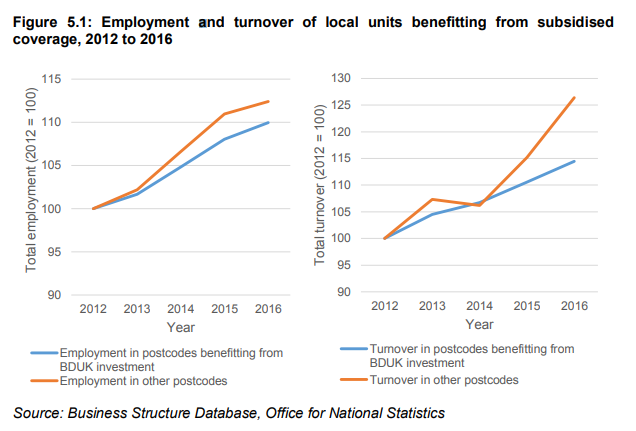 As you can see from the tables above, the ‘other’ regions are still growing at a faster rate, though you have to question how big the digital divide would be today without the telcos being ‘encouraged’ to invest in rural areas with government subsidies. Growth is a positive, as it would be a fair assumption the statistics would be in decline without improved connectivity.

Education and health and social work were the sectors which really benefited here (worker turnover increased 4.7% and 3.7% respectively), though subsidised coverage raised turnover per worker in the manufacturing sector by around 0.8%. With improved connectivity now in place in the manufacturing space the opportunity to demonstrate further benefits through IoT and smart-factory environments is much more apparent. The manufacturing segment might be a slow-burner with the next wave of technological advancements proving to be the gamechanger.

With a benefit to cost ratio of £1.96 per £1 of gross public sector spending, it is difficult to argue with the success here. Yes, the numbers could be better, though as the report states the net benefits of the programme does not include any value associated with the future use of the infrastructure, you could conclude the value has been considerably underplayed. Governments do not often earn plaudits, but this does genuinely seem like an initiative which has been well managed, delivering on the stated promises.

Work is not complete on closing the digital divide, the South West for instance is still underserved for example, though it is difficult to argue that the government hasn’t done a bad job overall.

Aussies show us how it’s done in the broadband world

Would you believe it, Nokia is expanding its 5G portfolio

SK Telecom and Deutsche Telekom buddy up for 5G