Embattled Chinese vendor Huawei has picked the middle of the US President’s visit to launch an ad campaign highlighting how important it is to the UK.

The new Huawei UK corporate ad campaign is themed: ‘A Fully Connected Britain is a Fully United Britain’ (see poster below). While there’s plenty of evidence on the internet and especially social media to call that claim into question, the point Huawei is presumably trying to make is that the country would be worse off without Huawei’s help in building its networks.

Huawei says it has played a pivotal role in helping to shape the UK’s digital future since 2001. The campaign claims Huawei contributes £1.7 billion of value to the UK economy, including 26,000 jobs and £470 million of tax revenues. The two points about the importance of connectivity and Huawei’s contribution to the UK economy are quite distinct, but the purpose of this campaign seems to be to conflate them.

“We have operated in the UK since 2001 and supply all the major telecom operators with our products and solutions,” said Jerry Wang, Huawei’s UK CEO. As long-term investors we are committed to helping create jobs and opportunities, building partnerships and supporting local communities across the UK.”

It surely can’t be a coincidence that this campaign is being launched on the second day of US President Trump’s state visit to the UK. The Prez is expected to pressure UK leaders into taking a harder line against Huawei than they currently seem inclined to and Huawei is sensibly getting its retaliation in first.

Whether a bunch of posters going on about how great it is will do Huawei any good is another matter, however. While Huawei has doubtless been an important contributor to the UK economy, there are plenty of other networking vendors to choose from. More importantly, Trump knows he’s in a strong negotiating position as the UK is desperate to foster closer ties with non-European countries thanks to Brexit.

Trump has been downplaying the prospect of pressuring the UK in his public statements, but it’s hard to see how he would be happy with anything short of an outright ban of Huawei gear in the 5G network. The issue has become symbolic of the strength of the relationship between the US and its allies and UK leaders may well end up concluding the value of staying in Trump’s good books is considerably more than £1.7 billion. 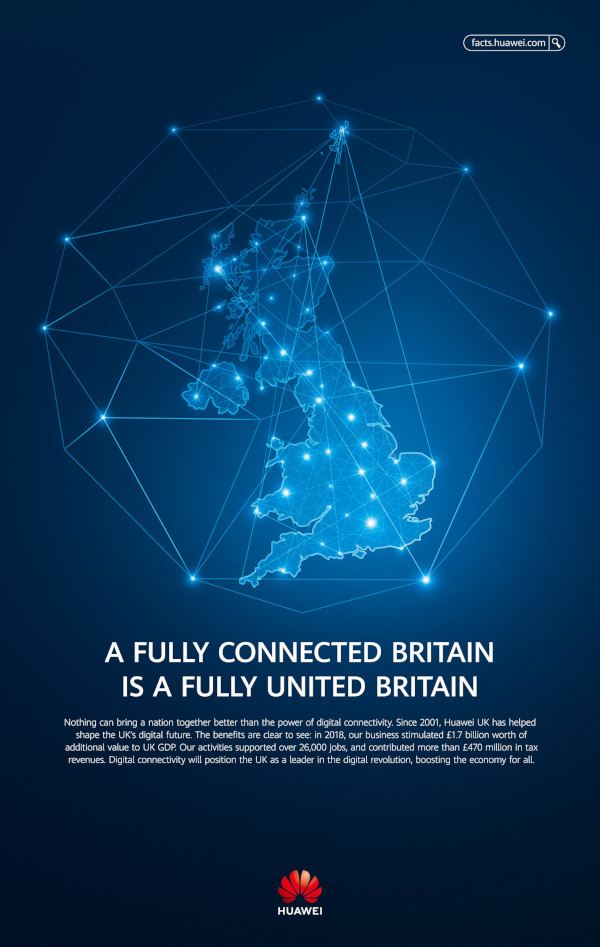 Huawei gets out of the subsea game

UK government heralds ‘superfast’ broadband progress, BT to give some cash back