AT&T Inc., the holding company of AT&T operating companies which provide AT&T services in the United States and globally, announced their first quarter results, posting first quarter net income of $3.7 billion, with diluted EPS increasing from $0.67 to $0.70 on the back of first quarter consolidated revenues of $32.5 billion, up 3.6% compared to the previous year. The strongest revenue growth in the last two years came after a steady rise in the revenues from both its wireless segment and wireline consumer revenues.

For its wireless segment,  AT&T realized continued margin expansion and strong adoption of Mobile Share and AT&T Next plans. These saw its wireless revenues growing 7% to $17.9 billion with wireless service revenues making up $15.4 billion.  ARPU from phone-only postpaid increased 0.4 percent compared to the previous year while ARPU from phone-only postpaid with AT&T Next monthly billings increased 2.0%, contributed by its equipment installment plan, and the increasing number of lower-ARPU but high-margin tablets. Total wireless subscribers increased by 1,062,000 in the quarter, led by 625,000 postpaid net adds and 693,000 connected device net adds. Other highlights from its wireless market includes the growth in the number of subscribers who chose AT&T Next and Mobile Share plans, with Mobile Share plans, including Mobile Share Value, now representing nearly 33 million connections, or about 45 percent of postpaid subscribers.

A&T’s first-quarter wireline revenues were $14.6 billion, down 0.4 percent versus the year-earlier quarter with revenues from residential customers totaling $5.7 billion  with its U-verse subcribers (TV and high speed Internet) reaching 11.3 million in the first quarter. Overall, total wireline broadband subscribers increased by 78,000. Total wireline broadband ARPU was up 9 percent year over year. According to AT&T,revenues from strategic business services, the next-generation capabilities that lead AT&T’s most advanced business solutions — including VPN, Ethernet, cloud, hosting and other advanced IP services — grew 16.1 percent versus the year-earlier quarter. These services represent an annualized revenue stream of more than $9 billion and are more than 26 percent of wireline business revenues. 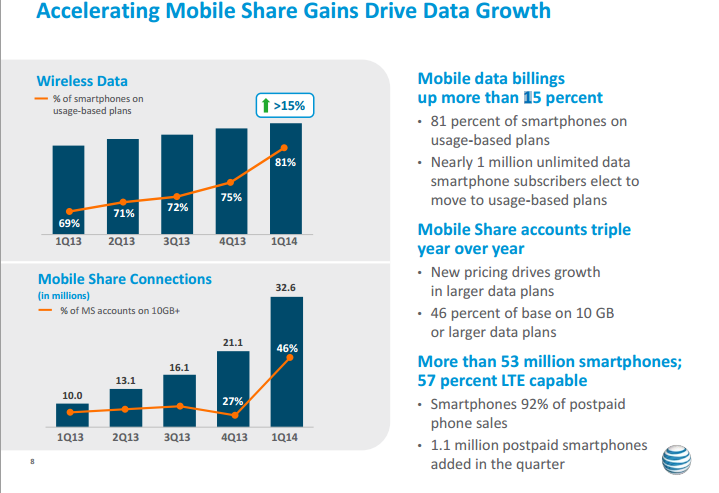 “We have been working very deliberately to transform our business, and this quarter you really start to see the benefits. Customers really like the new mobility value proposition and are choosing to move off device subsidies to simpler pricing while at the same time, they are continuing to move to smartphones with larger data plans. Wireless postpaid net adds were more than twice as many as a year ago, AT&T Next sales surpassed our expectations, and we had a tremendous surge in Mobile Share plans of 10 gigs or higher. We also had our best wireline consumer revenue growth since we first introduced U-verse in 2006 as our Project VIP build continues to make progress.”