The net neutrality retaliation has begun and it is pretty much as we expected; lawsuits, posturing and more lawsuits.

Starting with the first batch of lawsuits, a horde of Attorney Generals from 21 states throughout the US, as well as the District of Columbia’s Attorney General, have signed a petition for review formally kick-starting the process of taking the FCC to court. New York’s Attorney General Eric Schneiderman is leading the coalition, which features the following:

“An open internet – and the free exchange of ideas it allows – is critical to our democratic process,” said Schneiderman. “The repeal of net neutrality would turn internet service providers into gatekeepers – allowing them to put profits over consumers while controlling what we see, what we do, and what we say online.

“This would be a disaster for New York consumers and businesses, and for everyone who cares about a free and open internet. That’s why I’m proud to lead this broad coalition of 22 Attorneys General in filing suit to stop the FCC’s illegal rollback of net neutrality.”

The coalition filed a petition for review in the US Court of Appeals for the DC Circuit on the grounds the repeal of the regulations violates Administrative Procedure Act. Under this act, the FCC cannot make ‘arbitrary and capricious’ changes to existing policies, such as net neutrality, with the coalition stating the FCC has not justified the Commission’s departure from its policy and practice of defending net neutrality. 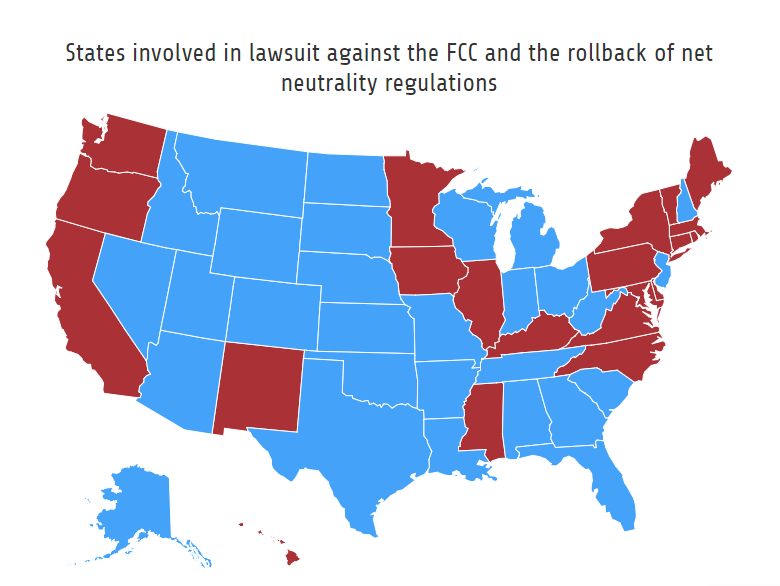 As you can see from the map above, the state AG’s who are contributing to the coalition are largely what you would expect. The coastal regions, with the larger US cities, are traditionally Democratic strongholds, and this coalition largely reflects this political stance against the Republican-leaning FCC. That said, there are a few examples where the AG is going against the political sway of the state.

In Iowa, Kentucky, Mississippi and North Carolina, both Senators are Republican, though the Attorney General has decided to side with the coalition. It should be worth noting, in all of these examples, the Attorney General is a card-carrying Democrat. While conflicts like this are uncommon, they are certainly not unheard of. Elsewhere there is also a bit of steam gathering to block the FCC, taking us nicely onto the posturing…

Lobbyists have been working around the clock through the last couple of weeks to gather support to override the FCC vote on net neutrality. The bill, which is being pushed by Senator Ed Markey would prevent any change. The vote will take place today (January 16) with the pro net neutrality enthusiasts one vote short of the 51 Senators they would need to block the FCC’s repeal of the rules.

What is unfortunate for the Democratic efforts to block the net neutrality repeal in the Senate is the magic number of 51; there are only 49 Democratic Senators currently. That said, an ally (albeit most likely a temporary one) has been found in the Republican Senator for Maine Susan Collins who will vote to block the FCC. Finding another ally on the other side of the aisle might be a tricky task, but who knows.

One. More. Vote. With the support of just one more Republican Senator we can pass my CRA to restore #NetNeutrality. Help us win this. We need your Senators to stand up for a free and open Internet. pic.twitter.com/ImrqBcKwuv

What is worth noting is that even if supporters find the extra Republican vote, therefore passing the bill in the Senate, it would still have to pass through the House, where the Republicans once again have a majority. The bill faces an uphill battle to say the least.

Now we have dealt with the Attorney Generals lawsuit, and posturing by PR point scoring Senators, its back onto another lawsuit. Mozilla has gotten in on the act, filing a petition in federal court in Washington, DC.

“Ending net neutrality could end the internet as we know it. That’s why we are committed to fighting the order,” Mozilla said on its blog. “In particular, we filed our petition today because we believe the recent FCC decision violates both federal law as well as harms internet users and innovators. In fact, it really only benefits large Internet Service Providers.”

Mozilla has also pressed for voters to pressure their Senator into blocking the FCC’s repeal, but we think there will be more success seen in the courtroom.