The UK government has announced yet another scheme designed to boost fibre penetration but this one might actually be useful.

£67 million has been made available to be converted into vouchers that are designed to help with the costs of connecting to ‘full fibre’ broadband. The voucher value threshold for consumers is £500 and for SMEs it’s £3000. The official name of the initiative is the Nationwide Gigabit Broadband Voucher Scheme (GBVS).

Of course politicians find it impossible to redistribute public money without positioning it as an act of personal altruism. “We’re backing Britain’s small businesses by investing £67 million to bring full-fibre broadband to more businesses up and down the country,” said UK Chancellor of the Exchequer, Philip Hammond. “This means faster, more reliable broadband access as we build the digital infrastructure we need to make our economy fit for the future.”

“Small businesses are the backbone of the British economy and now they can turbo-charge their connectivity with gigabit speeds,” said DCMS Secretary of State, Matt Hancock. “By building a full fibre future for Britain we are laying the foundations for a digital infrastructure capable of delivering today what the next generation will need tomorrow.”

Here’s what the release has to say about how to get hold of this wedge:

Businesses and residents can get vouchers from suppliers who are registered with the scheme. Vouchers may only be used to support the cost of eligible connections. Suppliers can offer vouchers to both new and existing customers.

Where suppliers are able to provide qualifying connections to single SMEs, vouchers will be made available to cover up to £3,000 of eligible costs.

In some areas the value of a single voucher will not fully meet the installation costs of a gigabit capable full fibre connection. Anyone in this position can also benefit from the group approach outlined above.

So it looks like a fair bit of hassle for consumers to get their half a grand but then again it’s worth it if you can pull it off. Let’s see what the uptake is like before we get too excited.

In other UK fibre news Openreach has announced a recruitment drive, resulting in a flood of political approval. The fixed line wholesaler is going to hire 3,500 trainee engineers over the next year and will open the first of 12 new fibre engineering schools in Bradford.

“It’s great news that Openreach is creating 3,500 new permanent jobs rolling out full fibre broadband,” said Hammond, who starting to look obsessed with fibre. “This digital infrastructure will be welcomed by families and business across the country, and these new highly skilled jobs will be a boost to our talented workforce as we build an economy fit for the future.”

There were also extensive quotes from Openreach but they were largely pieces of self-promotion banging on about how committed to laying fibre to even the most remote parts of the country and how important it is that these hires are nice and diverse. But credit where it’s due – there does seem to be a decent amount of commitment to improving the country’s fibre infrastructure, which can only be to the national benefit.

Here’s a photo of some of the larks Openreach recruits have to look forward to. 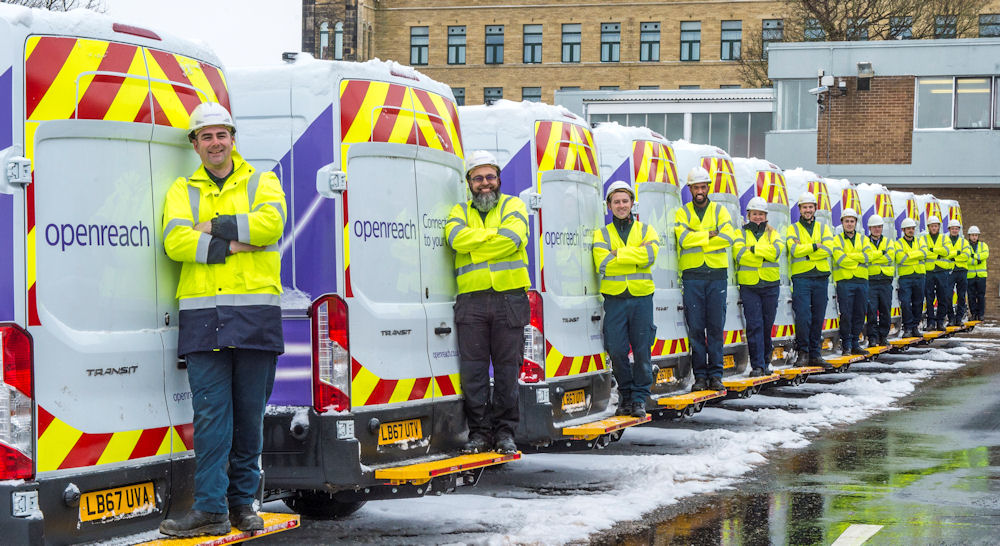 UK Government hashes up the past, claims mobile coverage sucks

India goes opposite direction to US on Net Neutrality