The results are in and the fastest place for broadband in the world is Singapore, but if you want to watch HD movies, don’t visit Yemen.

The research itself was conducted by M-Lab, a partnership between New America’s Open Technology Institute, Google Open Source Research, Princeton University’s PlanetLab, and other supporting partners, and compiled by Cable.co.uk. Through the collation of 63 million speed tests over the last 12 months, the countries of the world have been ranked by broadband speed, and it’s a middle of the road 31st for the UK.

Singapore sat at the top of the list with an average download speed of 55.13 Mbps, with seven European nations in the top ten. In total, 20 European countries were counted in the top 30, with seven from Asia, and the US, Canada and New Zealand rounding up. In Singapore, if you wanted to download a HD movie it would take 18 minutes and 34 seconds, while the same 7.5 GB movie in the UK would take one hour two minutes. At least we’re not in Yemen, where it would take two day, two hours and two minutes. 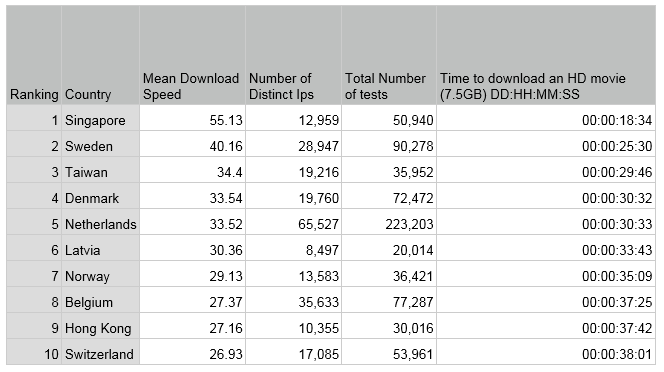 “These results offer us a fresh perspective on where we sit in the broadband world,” said Dan Howdle of Cable.co.uk. “Relatively speaking, we are near the top of the table. However, many of those ahead of us – some a long way ahead – are our neighbours both in the EU and wider Europe.

“Superfast rollout in the UK continues apace. Goals are being met, new initiatives undertaken and public funds being made available. However, clearly there are lessons to be learned both from Europe and from those topping the table.

“Not least the importance of reaching those with the lowest speeds, predominantly in very rural and/or hard-to-reach areas, but also greater investment in hyperfast fibre to the home (FTTH) networks, which currently reach only 2% of properties in the UK, compared to Sweden or Latvia, say, where FTTH exceeds 40%.”

Such a statement shows the precarious position the UK is actually in. 31st is not a bad position, it shows there are investments going into infrastructure, but the lack of ambition in fibre on the whole could be very damaging in the long-run. Fibre is the best option available, but the long love affair with copper is proving hard to kick. Yes, it is cheaper and easier to put in place, but this is short-term thinking.

While 31st should be noted, it should also be taken as a warning. The difference between those who have invested in FTTH and those who haven’t is already visible, and it will only get worse. Of course, few will take this as a warning. The likely result is that the UK will continue to sleepwalk towards mediocracy through ineffective government action and unambitious investment strategies from the operators.

“While the UK continues to invest in its digital infrastructure, today’s ranking of UK broadband speeds is a clear indication that more needs to be done,” said Ewan Taylor-Gibson at uSwitch.com.

“It’s not just the global divide where we fall down. In the UK there is often a vast regional variation and significant disparity between rural and urban in terms of broadband experience so for those languishing on poor speeds, improvements can’t come soon enough.”

We’ve hit the go button on 5G, now what?

Would you believe it, Nokia is expanding its 5G portfolio