Unsurprisingly, Verizon and AT&T have both agreed the FCC is heading the right direction by hitting the net neutrality rewind button, but consumer groups are fuelling the fire by encouraging protests on December 7.

Demand Progress, a net neutrality advocate, has called for demonstrations at Verizon stores on December 7 to protest FCC moves to scale back net neutrality rules. The net neutrality debate has been one which has caused quite a stir in the States, and considering the diva nature of American politics and privacy advocates, it is going to continue for some time.

While net neutrality is a contentious issue, the argument has been taken up a level in the US. Some might argue this is primarily down to the partisan nature of American politics, as the argument hasn’t escalated in this manner elsewhere. The FCC is probably not right in completely scaling back regulations, however the prior administration was probably not right in such heavy-handed rules. The answer will lie somewhere in the middle, but try telling that to American politicians who would rather denounce opposition than find a logical solution which works for the industry and the consumer.

“Internet users outraged by Verizon-lawyer-turned-FCC-Chairman Ajit Pai’s plan to gut net neutrality are planning to protest at Verizon retail stores across the country on Thursday, December 7th, one week before an expected vote at the FCC. In some cities, protesters will march from Verizon stores to lawmakers’ offices,” Demand Progress has written on its website.

Demand Progress is not the only organization which has found issue with the new proposals either. Google, Facebook and Netflix have all put out statements frowning at Pai’s recipe for regulation, and of course the general public has made its voice heard, as you can see below. 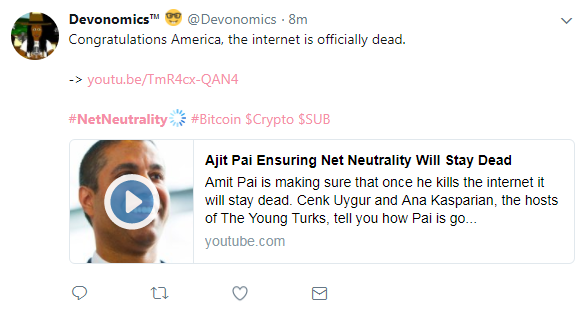 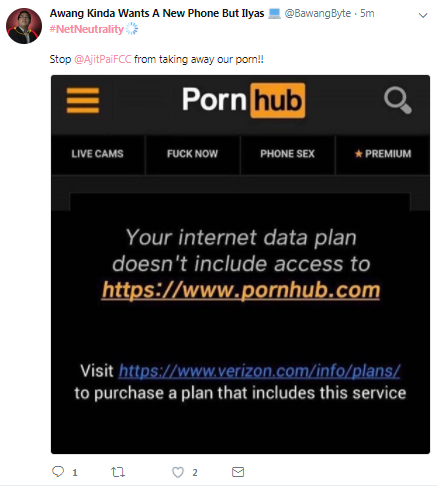 But before the FCC is painted with a broad Republican brush, it is always worth remembering the debate rages internally as well. Having contributed to the creation of the net neutrality rules, FCC Commissioner Jessica Rosenworcel is seemingly able to do nothing but sit and watch her work being dismantled by Pai.

“Following actions earlier this year to erase consumer privacy protections, the Commission now wants to wipe out court-tested rules and a decade’s work in order to favour cable and telephone companies,” said Rosenworcel. “This is ridiculous and offensive to the millions of Americans who use the Internet every day.”

On the other side of the coin, the telcos are clearly pleased with the move, though this is hardly a surprise.

AT&T were equally as thrilled with the proposal. Here are the thoughts of Joan Marsh, AT&T Executive Vice President of Regulatory & State External Affairs.

“Abandoning decades of prudent, bipartisan regulatory restraint, the Wheeler FCC took the draconian step of dragging broadband access services into the morass of common carriage regulation, imposing a new conduct standard that effectively gave the FCC a blank check to shut down innovative new ISP services that consumers want based on little more than speculative concerns.

“While we look forward to reading the details of the order, this action will return broadband in the U.S. to a regulatory regime that emphasizes private investment and innovation over lumbering government intervention, ending the regulatory uncertainty created by the 2015 rules and the deleterious impact such uncertainty had on investment and job creation.”

Don’t expect this debate to end any time soon. Before too long you can expect to see a host of lawsuits attempting to prevent the removal of the rules, as is usually the course of action in the US. Before too long someone might have that eureka moment, realizing the right answer is somewhere in the middle of lefty regulation and righty market freedoms.

BT, Nokia and Bristol combine to prove 5G is a thing