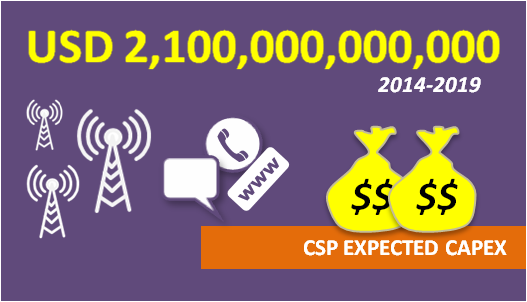 Telecom vendors will be seeing a huge change in the market landscape as new entrants offering software- and IT-centric solutions start to populate the ecosystem, which will be seeing CSPs spending more of their capital expenditures on these new breed of solutions. As the software defined networking (SDN) and network functions virtualization start to take off across CSPs around the globe, CSPs will undoubtly begin to move to virtualizing their network systems, adopting leaner infrastructures that are able to improve their capacity and capabilities to cater for larger traffic volumes and roll out more innovative and complex services that respond to real-time inputs.

In a recent report by Ovum, CSPs are projected to invest more than US$2.1 trillion in capital expenditures from 2014-2019 with 2019 projected to record US$367 billion. The market will hence see vendors, both conventional and those offering SDN/NFV-based solutions competing for these dollars, though with the solution buyers pool itself expanding to include virtual network providers and non-CSP players who are also investing in CSP-grade network infrastructure, vendors may see the demand for their solutions expand beyond the usual market segments. Ovum projects that the telecom vendors may see an additional US$50bn or more in 2019 alone, citing buyers from the digital media segment as one of the drivers for the additional demand.

Vendors can expect the CSP’s expenditures to be influenced primarily by market sizes, with countries such as China, India, US, Brazil and Russia being some of the most vibrant markets with highest numbers in mobile subscriptions and also other countries which record high growth rates in 3G and 4G LTE deployments and the roll out of next generation data services. According to the Ovum report, US, China and Japan alone will make up 45% of the expected capex expenditure for the 2014-2019 period, following by Brazil, Russia, UK, Canada, Germany, India, Italy, France, Australia, Korea, Spain, and Mexico.

“The telecom world is changing. Established market boundaries are falling by the wayside. Competition is tougher, service innovation is faster, and margins are often slimmer. Value (and profits) are shifting among industry segments. There are two things to remember in all of this. First, most of this change is great for the consumer. Users are capturing enormous benefits from the technology investments and new business models of CSPs and adjacent market players. Second, there are upsides to this industry change for vendors. Despite flattish CSP capex, there is a new sector of companies building network infrastructure, partially offsetting the CSP weakness. To profit from this digital media growth, though, vendors will need strengths in both telecom/hardware and IT/software, and learn to serve this new customer type. The competitive landscape of CSPs differs starkly across these markets, as do regulations, demographics, local vendors, and even technology standards. These markets are expensive to address, requiring significant local investment (e.g. R&D facilities) for non-local companies.”

Vodafone Wins the Biggest Chunk of 5G Spectrum in Spain