Voom Pitch started as Pitch to Rich in 2012, consisting of just 60 pitches. Renowned entrepreneur and proliferator of the Virgin brand Richard Branson has been involved from the start and since then it has grown into an annual event that attracts thousands of entries. It seems to be positioned as a more grown-up version of TV’s Dragon’s Den, which long ago descended into self-parody.

At an event in Central London we were told that the competition is as much about developing a startup ecosystem for as many of the entries as possible as it is for recognising the winners. But having said that the prize fund is over a million quid, so it would certainly come in handy. This year’s winners (one startup and one SME) will be announced on 23 May. 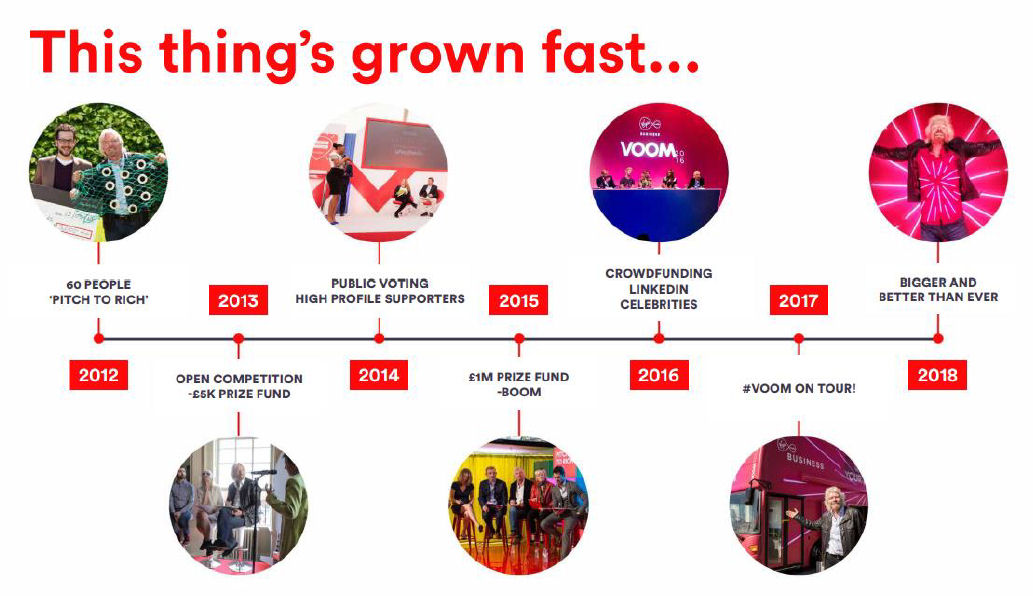 We also met a couple of previous participants in the scheme. Approved Food appeared on Dragon’s Den in 2014 but to no avail. The next year it was the runner-up in Pitch to Rich and now employs 50 people. We spoke to Dan Cluderay who explained that he specialises in the sale of clearance food and drink at significant discounts and some of the real trick lie in developing relationships with retailers to get hold of this stuff at the right time.

What A Melon, which focuses entirely on the packaging, distribution and sale of watermelon water, won the Voom Crowdfunder award in 2016 after raising £110k. Olly Bolton of What A Melon explained that the increased exposure this provided has helped secure orders from the likes of Sainsbury’s, Waitrose and Itsu. We couldn’t see any of his products on Approved Food but it’s presumably just a matter of time.

While it’s genuinely encouraging to hear these stories of humble startups helped to become strident enterprises, Virgin Media Business isn’t a charity, so we asked Stephen Wind-Mozley, Director of Digital, Brand & Innovation (pictured above), what’s in it for VMB. He was happy to say the direct business benefits lie in things like promoting the Voom brand (which is also what VMB’s business broadband is called) and direct lead generation.

A couple of partners of Voom Pitch were also in the room. Both PayPal and Crowdfunder confirmed that they view participation as a win-win along similar lines and are both have business interest in getting close to the UK startup scene. Paypal seems to be making a strong move in this direction through its PayPal Working Capital offerings.

We know there’s not a lot of money in pure philanthropy, in fact that’s kind of the point, but we’re also happy to take apparent win-win initiatives such as Voom Pitch at face value. We have a justified inferiority complex in the UK about our startup culture, compared to Silicon Valley and more recently parts of China, so anything that offers genuine assistance to our entrepreneurs is OK with us.

What does the UK Autumn Budget mean to the telco industry?

DT continues to lie to itself with super vectoring