If the years of sleepless nights and hype are actually going to mean anything, 5G has to deliver more than 4G possibly could, and right now it isn’t.

This might sound like an incredibly negative comment, but it is a realistic assessment of where the industry actually is today. Hitting the on button was simply the first phase, it delivers an enhanced 4G connectivity environment. The big question is what comes next.

“At the moment, the monetization of 5G is similar to that of 4G. This is the most simplistic monetization model. But we won’t be able to do anything new until ‘real 5G’ emerges.”

This is where the big challenge for the industry is about to emerge. The first usecases are simplistic ones, building on the ‘bigger, badder, faster’ mentality of the telecommunications industry. It makes the ‘pipe’ bigger, allowing more data to flow through it, and faster, enabling faster download speeds.

An example of this enhanced connectivity model is over at Verizon. Speaking at the same event, Ronan Dunne, President of Verizon Wireless, pointed towards the increasingly worrying strain being placed on the network. 5G allows Verizon to meet these demands, reduce the strain on the network and increase profitability through technology efficiencies.

Another gain is on the convergence side of telecoms. In areas where Verizon does not have a fixed network, Dunne pointed towards the FWA alternative which 5G enables. Three UK is another company which is exploiting this product and there are numerous other telcos who are eyeing up FWA as a proposition to build bigger product portfolios.

Customers might be willing to pay for this incremental upgrade, but it doesn’t fix the bigger issue in the telco space; adding extra value, and therefore seeking new revenues.

This is not a new idea. One of the basic ambitions of 5G is to evolve the telco from a communications service provider to a digital service provider. But how are the telcos getting on in searching for pastures new?

As you can see from the slide below, it hasn’t been the most ambitious start. 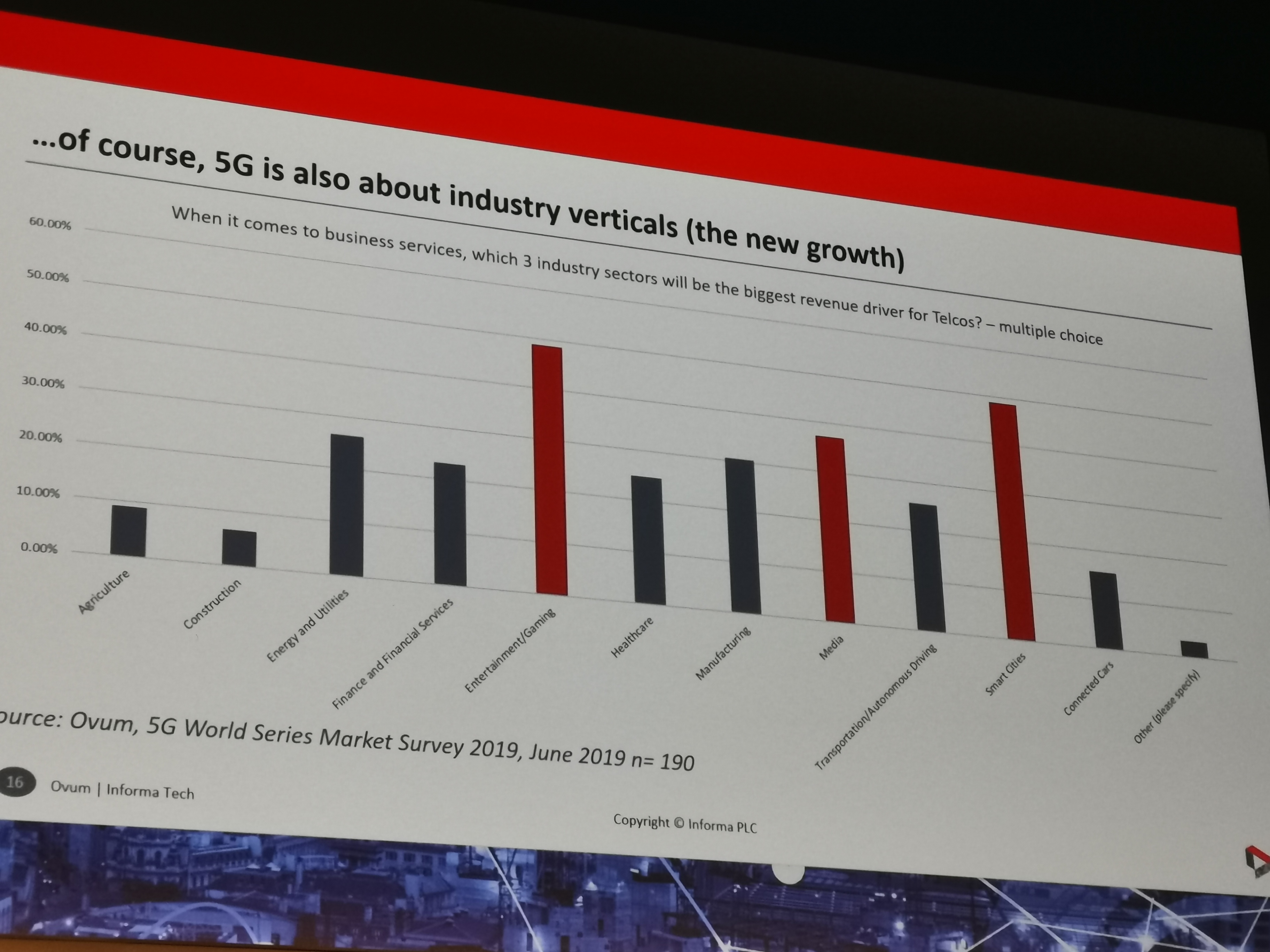 Although you can see there are ambitions to take advantage of newly emerging segments, these are areas which the telcos already operate in. Entertainment, media and smart cities will certainly add some weight to the telco cause, but they will have to venture further afield.

SK Telecom is one company which is pushing the boundaries of the acceptable norm, though this should not really come as a surprise considering the leadership position South Korea has crafted.

During his own presentation, Takki Yu confirmed SK Telecom is challenging itself to seek out new ideas and business cases.

“5G era has begun, let’s do anything which we can imagine,” said Yu. “That is the key message from SK Telecom.”

An interesting point made by Yu was about the mentality of SK Telecom. The team is aiming to bring anything which would be considered offline today into the mobile mix. It does sound very ‘blue-sky thinking’, but it is important to think about new ideas. Many telcos will claim they are doing this, though there is little evidence to support the PR plugs.

Looking at the POCs which SK Telecom is exploring, there is quite a bit of breadth. In partnership with the Sinclair Group, SKT is working towards 5G-based broadcasting services, it is investigating the potential of a 5G-hospital with Yonsei Severance, with WeWork it is working towards a 5G-smart office, with the Smart Manufacturing Innovation Center the team is exploring the next generation of smart factories and it has set-up a smart city in the Incheon Free Economic Zone.

As Ovum’s Dario Talmesio pointed out, the issue many telcos are facing is a lack of industry-specific knowledge. Creating these solutions for the verticals, and integrating them appropriately, cannot be done if the telcos remain as a silo. This is what the Asian telcos have been doing very well over the last few years; partnering with industry verticals. Unfortunately for the European telcos, they are playing catch-up here.

Right now, the world might be wowed by the incredible speeds which are being delivered through 5G networks, but the truth of the matter is that this will not last forever. The wow-factor will fade, and soon enough customers will realise it isn’t actually that innovative. Soon enough, the 3GPP will unveil Release 16 and ‘real’ 5G will emerge. This is where the telcos will have to be very attentive or risk being relegated to the role of connectivity partner.